DURHAM – Beyu Caffe owner Dorian Bolden always had plans to expand. Even something like a pandemic isn’t going to get in his way.

This week, the popular Durham entrepreneur unveiled renderings of his Boxyard RTP expansion plans. He is one of 12 known tenants getting ready to open as part of Boxyard RTP.

Inspired by a similar facility in Tulsa, Oklahoma, the $7-million project is spearheaded by the Research Triangle Foundation (RTF) and is set on 12 acres of the former IBM campus. It involves converting 38 shipping containers into a new complex of restaurants, retail stores, an amphitheater, a dog park and sculpture gardens. Groundbreaking kicked off last August, and it’s expected to be up and running by spring.

Many hope it will usher in a new era for the aging office park at N.C. 54 and Davis Drive, and bring dining, entertaining and shopping to the campus.

“It has a cool vibe,” say Bolden, who is opening his third shop after recently closing on about $220,000 – all fronted by Black angel investors who are supporting his vision to expand his grab-and-go coffee concept to RTP. “It’s also another way of being environmentally friendly and sustainable.”

“I also love the makeup and diversity of what they are trying to bring to the area,” he adds. “It really has this authenticity that is the Triangle.”

It’s a mixed group, with several female and African American founders, including Bolden, but that’s what attracted him to the project in the first place. His shipping containers have already arrived, and contractors are working on the upfit now, he says.

Though as Bolden admits, this isn’t the easiest time to be expanding. The pandemic has been hard on the service industry as a whole.

Throughout the crisis, Bolden says he’s moved fast to adapt. He founded Beyu Caffe (pronounced be-you) in 2009 as the ultimate community gathering place where everyone could “be you.”

Back in April, on the eve of its 10th anniversary, his flagship location in downtown Durham successfully launched a new online delivery service through his website. It’s also become a kind of “community center” in recent months, serving more than 55,000 meals to school children and first responders during the crisis, he says.

Meanwhile, his spin-off concept, Beyu Blue Coffee, which opened at Duke University in 2018, is back up and running after a brief hiatus.

“Our sales are down about 20 percent over last year. But to say that, is a blessing,” Bolden said. “For us, being able to provide jobs in this environment, we’re ok with that. The future is still uncertain. By no means, are we getting comfortable. We can’t afford to.” 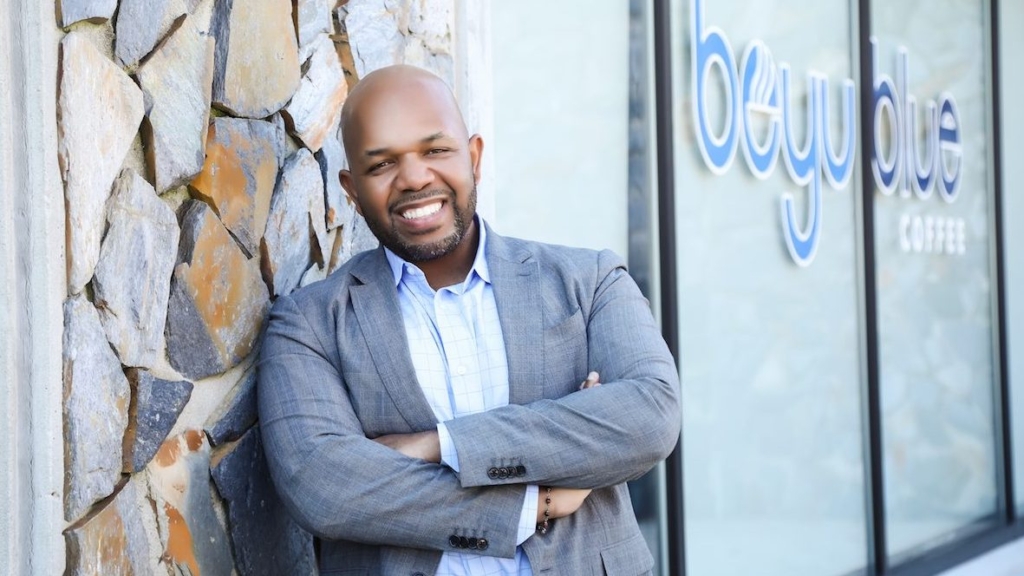 The Boxyard project is all part of a larger push to bring more business and foot traffic to the heart of RTP.

Founded in 1959 and in the center of three Tier-1 research universities, RTP is home to more than 300 companies, including IBM, Cisco, Credit Suisse, BASF, GlaxoSmithKline, Lenovo and RTI International.

In addition to Boxyard, RTF has another big project in the works. It’s called HUB RTP and it’s being billed as the “new front door” to the Triangle region. It includes six million-square-feet of offices, modern residences, hotels, restaurants and retail developed in partnership with corporate developer KDC.

Next Tuesday, it will hold a “virtual groundbreaking.”

“This is the long-anticipated opportunity to retool RTP. With the support of Durham County, the companies in RTP and private partners including KDC, we can do this in 2020,” says RTF’s president and CEO Scott Levitan. “Today’s companies and workforce are looking for an integrated live, work and play environment. We are creating that kind of energy in the heart of RTP.”