Johnston County, N.C. – February 4, 2019. The Johnston County Board of Commissioners has approved two requests for local incentives in support of major investments in Clayton and Selma.

Dollar General plans to assume 320,000 sq.ft. of cold-storage space at the Carolina Distribution Center in Clayton. The move brings a $13 million capital investment by the Tennessee-based retailer and creates 105 jobs with average annual salaries of $33,280. Dollar General’s planned workforce there exceeds the number formerly employed at the facility by Smithfield Foods, which relocated its distribution operations to Bladen County last fall.

“We’re excited to welcome this national retail name and the jobs and investment it intends to make in Clayton,” said Ted Godwin, chairman of the Johnston County Board of Commissioners. “Dollar General’s plans for cold storage operations here highlights several key Johnston County assets, including convenient proximity to a growing consumer base, affordability, diversified labor assets and supportive local government.”

Commissioners approved a performance-based five-year, 50 percent grant based on Dollar General’s investment of $13 million in real and personal property at its Clayton facility. That amounts to approximately $46,800 per year, or $234,000 over the life of the grant. All payments are predicated on the company meeting its investment and job creation targets.

The Town of Selma is the site of a proposed 353-acre mixed-use development that will include a commercial and industrial area known as Eastfield Business Park. AdVenture Development LLC, a full-service real estate company with offices in Selma and Pittsburgh, plans to develop one million square feet of warehouse and flex-space for industrial and office tenants at the property, which sits at the intersection of I-95 and U.S. Highway 70 (future I-42).

The new industrial space is part of a much larger plan for medical office facilities, single-family and multi-unit housing, retail shops, hotels and a senior living community. The Eastfield Project will include The Shops at Eastfield, Eastfield Estates, Eastfield Park and Eastfield Village. Developers expect to invest more than $287.5 million in the initiative. Once complete, Eastfield will be home to 3,100 jobs. It will boost Johnston County’s annual GDP by $169 million, according to an economic impact analysis by Sanford Holshouser Economic Development Consulting, LLC.

“This site is uniquely positioned in the center of the county, the center of the state and the center of the Eastern seaboard,” says Kevin Dougherty, founder and president of AdVenture Development. His company’s interests in the Selma location was initially based on the advantages it offered retailers. “As we looked more closely at the site and considered all its potential, our interests turned to mixed-use and we began to think bigger,” Dougherty says.

Conversations with county leaders helped convinced him the project could encompass convention space, a business park, high-end dining and other amenities currently in short supply in the fast-growing county. He credits a supportive local government with helping define the company’s vision for Eastfield. “Nothing like this takes place in a vacuum,” Dougherty says. “This would not have happened but for the involvement of town and county leaders.”

Commissioners approved a local incentives agreement in support of the industrial phase of the Eastfield development. The property is within one of Johnston County’s four Opportunity Zones, a federal designation intended to draw private investment and job creation into low-wealth communities. The program was part of the tax reform package passed by Congress in December 2017.

“We’re hopeful that Eastfield becomes a recognized model for how county and municipal governments can work with private investors under a sustainable vision for mixed-use development that brings a diverse array of new jobs, amenities, assets and opportunities,” said Selma Mayor Cheryl Oliver, who also chairs the Johnston County Economic Development Advisory Committee. “This is a transformative project for the people of Selma, and the future begins today.”

Demographers project Johnston County’s population to swell to 300,000 over the coming 15 years, up from 205,000 residents today. That growth places a premium on planning, economic development, new infrastructure, housing and other services in the coming years, according to Chris Johnson, director of Johnston County’s Office of Economic Development. Johnston County’s 3.5 percent unemployment rate as of the most recent N.C. Department of Commerce release sits below both the state’s overall 3.8 percent and the 3.9 percent figure for the U.S. “Still, everyday we’ve got as many as 60,000 residents who leave Johnston County for work,” Johnson said. “It’s our job to turn those cars around.” 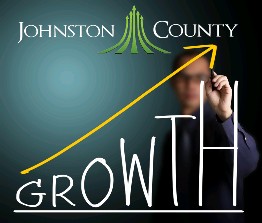