For the fourth consecutive year, North Carolina ranks as the No. 2 state to do business, according to Site Selection magazine.

North Carolina scored a total of 99 points across all categories in the 2018 Top State Business Climate Rankings, just two points behind top-ranked Georgia with 101 points. 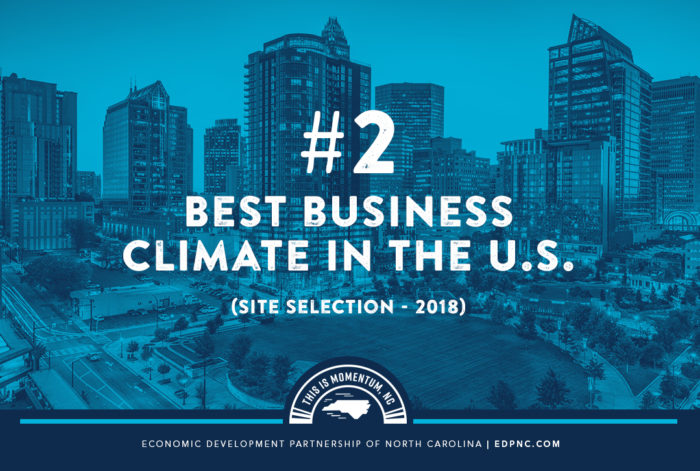 Rounding out the top five spots in the ranking are Texas, 90 points; Ohio, 89; and Tennessee and South Carolina tied at 88.

Fifty percent of the overall business climate ranking is based on a survey of corporate site selectors who are asked to rank the states based on their recent experience of locating facilities in them. North Carolina did particularly well in this category, moving up four spots from Site Selection’s 2017 survey to the No. 2 pick of consultants in 2018.

The other 50 percent of the overall ranking is based on seven criteria, including performance in Site Selection’s annual Prosperity Cup. North Carolina is currently No. 1 in this ranking of competitiveness in attracting new plants.

The remaining criteria include: total Conway Projects Database-compliant facility locations and expansion projects announced in 2017 (this considers only private-sector projects that involve one or more of the following — $1 million or more in investment, 20 or more new jobs or 20,000 or more square feet of new construction); total new facilities in 2017 per capita; total 2018 new projects year-to-date; total 2018 projects year-to-date per capita; and state tax burdens on new and mature firms.